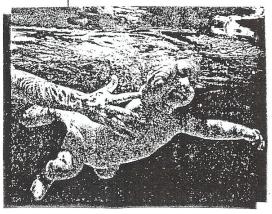 If children already learn to swim at an early age, not only is their physical development advanced, but also their power of concentration, reaction velocity, intelligence as well as social behavior at kindergarten-age are favorably influenced.
This is what several years of testing, at the German Sports College Cologne, revealed about the effect of early movement training on the general development of the pre-school child.

The starting point was earlier observations of infants swimming behavior. It was established, thereby, that children who had already taken part in swimming training in the third month of their lives were not only more skillful in their movements but also more self-confident and independent, in comparison to their contemporaries.
This was fully confirmed by systematic testing on kindergarten children, from 1974 to 1976, supported by the Federal Ministry for Education and Science. The observed children were assigned to six “Groups” who commenced swimming and gymnastic programs or only received instructions in gymnastics at different times (with 3,6 or 2,4 years resp.). One control group received no sports instructions of any sort.

The “swimming children” were ahead of their contemporaries, in all tested areas. Those who took part in baby swimming, from the third month of their lives, fared particularly well in each case, In regard to development of the intellectual capacities, it could be established that early swimmers showed higher intelligence values, already at the commencement of the two-year test period – when they were four years old, in nearly all sub-tests of the applied intelligence tests than children who belonged to the later advanced groups or also the control group.
In the social area, “swimming children” were more willing to make contact and adjusted themselves better in the group of contemporaries.
They were more independent and less timid, They could cope with new and strange situations better and their efficiency motivation rose steadily in the test period.

‘The researchers of the registered Association for Training Research Cologne explain the results to the effect that they are not due to physical training alone. Psychic treatment processes probably also played a part. Early-child movement training develops an area which enables the child to have successful experiences relatively easy. This lifts self-confidence and advances independence. At the same time, it seems to influence the manner in which the children and parents deal with one another – that is to say, that more and more independence is given or even urged upon the child. This again influences the pleasure of achievement and development of intelligence favorably.